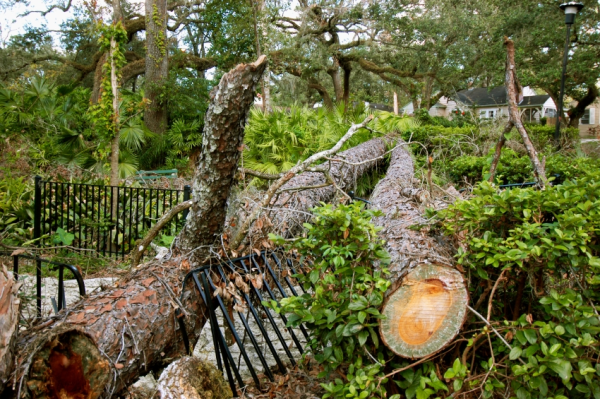 Pacific Northwest weather can be unpredictable. One day it might be sunny; the next day, homeowners around Oregon and Washington will need to prepare their homes and their yards for a rain and wind storm.

Breezy conditions are common in this area, but when a large windstorm hits, it can be damaging. In 1962, the storm on Columbus Day went down in history as a record breaker. The storm brought winds recorded at 116 miles per hour wind in the Portland area. The result was devastating: it killed 38 people, while injuring many more. In addition, power was out for three weeks and 50,000 structures around the area were damaged.

Earlier this year, Oregon saw some unusual weather patterns with record snowfall and a windstorm that boasted gusts of over 90 miles per hour. At least two deaths were reported due to the window storm and more than 218,000 people in Portland were without power for a night.

Windstorms are most commonly seen in November and January, but this year things looked a little different because of the harsh winter the area had. Experts believed that the many trees that fell during the most recent storm was caused by saturated soil and weakened trees from the snow and ice that happened before that.

On replacing your fence

If you experienced damage to your fence during a recent windstorm and repairing it yourself isn’t an option, we can help. Oftentimes, replacing a fence makes more sense because of the amount of time, money, and effort it takes to repair it.

If your fence needs a major overhaul – at least 20% of the fences panels or pickets need repairing – it’s probably best to just replace the entire fence, especially if the fence is old. Parts may have been worn out of time and it simply won’t withstand another storm. In addition, a new fence will provide enhanced curb appeal for your home and yard and it will also provide greater privacy and safety.

Once your fence is repaired or replaced, it’s important to maintain it well throughout the years. If you have a wood fence, seal it annually or every other year. If you have a vinyl fence, keep it cleaned and washed off with soap and a hose. If another windstorm hits the area and a falling tree limb hits your fence and damages it, take care of the problem right away so it doesn’t cause further damage to the overall structure.

Contact our experienced team of fence professionals today for information on how you can have a quality fence built for your home quickly and efficiently.

Making the Best of the Spring Rain

If you are having difficulty accessing information on this website or need materials in an alternate format, please contact sales@pacificfence.com for assistance.